Always be cautious when approaching wasps, especially around their nest sites. Each wasp is able to inflict multiple stings making them extremely dangerous if provoked. Their stinger is primarily used for subduing and collecting other insects to feed to their larva, however it’s also used to defend themselves and their nest.

There are several types of wasps that can be problematic for home owners and I will categorize them based on the type of nest they build because it is what most people can easily recognize.

The nests get large and can have over 100 workers in just one. The two images below show the exposed cone (the structure of the nest itself). These nests are usually found under roof lines, decks, shudders, or some kind of overhang that protects it from the elements. The two species that are found in the N.H., Seacoast and Southern York County M.E., regions are The Yellow Ring Tail paper wasp, Fig 1, and the Brown paper wasp, Fig 2. 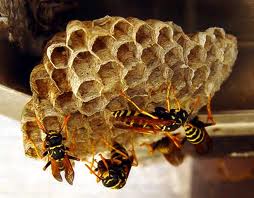 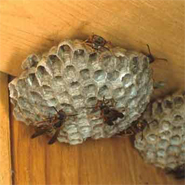 In the late fall mated queens will look for places to hibernate for the winter and then continue the life cycle for next year. These Queens hibernate in warm, dry, places, like your attic, and around windows of the home they are able to enter. They can sometimes become a problem inside a home in the winter months if we experience an unusually warm spell, and then in early spring when they come out of hibernation.

Yellow Jackets are by far one of the most dangerous insects in the N.H., seacoast and southern York county M.E., areas.

These insects create the round, grayish colored, paper like nests, that you see hanging from various wooden structures. Most commonly the insects build nests that hang from houses, trees, under decking, as well as inside wall voids and attics, and even underground in the yard. Where the nest is located will depend on what species of yellow jacket inhabits the site. These nests start from one queen in the spring that makes a nest the size of a golf ball and can grow bigger than a basket ball over the summer, and can house over 1000 workers in a single nest by the end of the summer. If disturbed, threatened, or handled and treated improperly, the nest can become aggressive (sometimes without much provocation), and the situation becomes very dangerous, and anyone can be seriously attacked and injured. 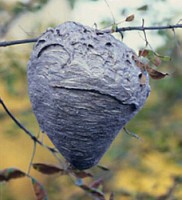 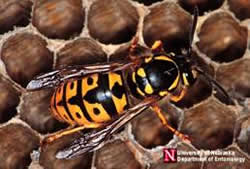 Fig 1, shows a typical Yellow Jacket nest. Fig. 2, German Yellow Jackets will create nests by finding a crack in a wall void or an attic, and can become a problem inside the house as the nest grows and in the later part of summer when it begins to get cooler and they need warmth. Fig. 3, Shows a classic picture of a Yellow Jacket, in the cone of the nest.

Bald Face Hornets are actually wasps. They are very dangerous and behave a lot like Yellow Jackets, in that it doesn’t take much to provoke them into an attack, and they have similar nest construction. Bald Face hornets are black and white in color, and about ½ inch long, as shown in Fig 1. They get their name because of their white faces which distinguishes them from all other wasps, as shown in fig 3. These insects also create nests that hang from houses, as seen in Fig. 2. Nests can hang from trees, bushes, and other wooden structures. The nests can be as large as a basket ball with up wards of a thousand workers by the end of the summer. These nests are exceedingly dangerous, they should be avoided and handled by someone qualified to deal with them. 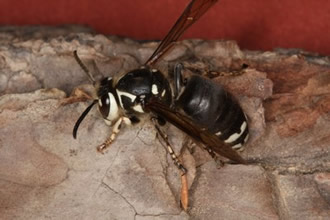 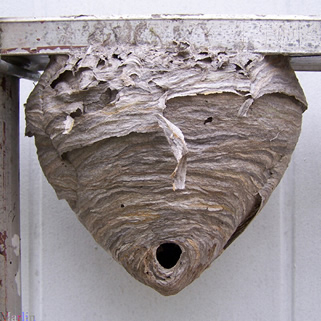 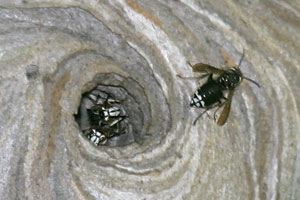 It is important to take all wasp nests seriously. As stated previously these insects can be very dangerous with little provocation. Once they are in defense mode if you are unfortunate enough to be a target, the best action is to run away from the area of activity, and stay away. Most wasps will not chase people over very long distances away from the nest so run until they cease and then check your clothing. The wasps sometimes get caught in fabric and will continue stinging until they are killed. Again, don’t ever attempt to remove a nest if you find one on your own, go seek professional service.

The best way to prevent wasps from nesting on or in your home is yearly service.

Tom has helped us keep pesky mice away! He's always professional and responsive to our needs. We continually appreciate his insight due to his knowledge and experience in this field. We highly recommend Ecotech!

“We've had some nasty critters invade our home and property through the years. But, whatever the issue is Tom comes promptly and never fails to remedy our problem. We are very satisfied customers who completely believe in and trust Tom.”

We had a horrible ant problem in the spring and a friend recommended Tom and his service. He came out, treated our property at a fair price and we never saw another ant all year!

I’ve been using Ecotech for over five years . Tom calls me back immediately and promptly comes to my home to check any issues. I use Ecotech for twice-a-year preventative insect treatment, mosquito spraying and critter issues. I’ve recommended Ecotech to my neighbors.

We are so pleased with Tom's reliable and outstanding service year after year. We had a problem with aggressive wasps that were getting into our house and stinging us regularly. From his first visit the results were immediate and effective. He now sprays the yard for ticks. Because of Ecotech my family can enjoy our backyard and use our deck again, thanks so much!

When you have to get up in the middle of the night to do the early morning news the last thing you need is a swarm of yellow jackets invading the house. Thanks for effortlessly solving the problem... as well as the others over the years.

Tom is there when you need him & has provided better results than the previous company I used. Thanks Tom.

Ginny Smith Alterio - So. Berwick ME

Tom does a fabulous job. He has taken care of our ant problem. Since we started to use Tom three years ago, we have not seen an ant. 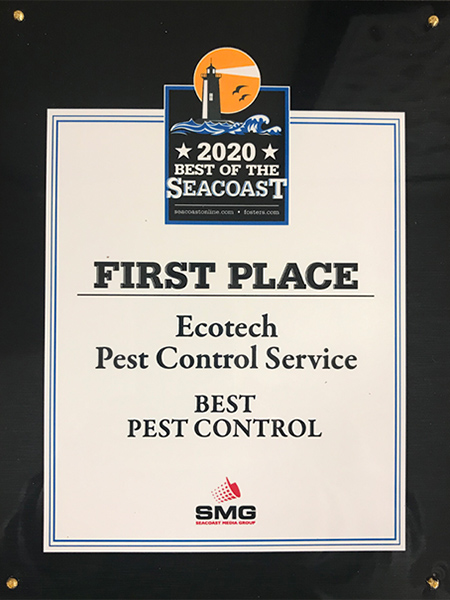